This is the first of a series of blog posts about Contract Testing which cover the minimum set of theory and practice necessary for an effective adoption in your team, from design to code integration.

Contract Testing is a category of testing activity where the data formats and conventions defined by two systems (services) which communicate a business value, is tested against a Mock called “Contract”. A service provides a callable API that can be consumed by another (or many) service which create an interaction between parties that needs to be satisfied during the evolution and developing of services which are now coupled. The interaction between services probably relies on a communication layer which can be slow or not reachable which can affect the test results. For this reason, sometimes the best solution is to verify the interaction with a TestDouble which describe the expectations between the parties.

For the sake of clarity, I have strong opinion.

Let’s suppose that we have a Product Service which has an HTTP method that provides product information in a JSON format upon receiving a product id:

The product information are consumed by Customer Service. 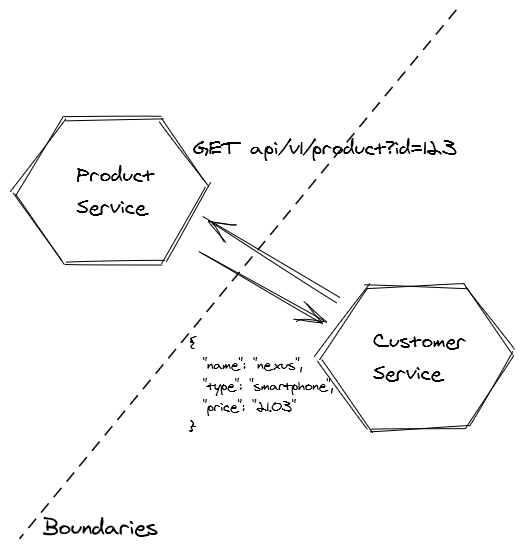 Conventions are defined in this way:

During developing, the Product service can evolve the API in a way that the HTTP response change the data format. For example, the type field from a string value change to object:

this is defined as a breaking change in which Provider doesn’t respect the defined interaction between Consumer.

In the same way, the Customer service can evolve the request call. For example, instead of call the API with a query parameter id, it can use a field in the header to query the Product Service. Also, this example is a sort of breaking change in which Consumer doesn’t respect the defined interaction between Provider.

Therefore, the interaction between services can be broken in many ways, and the cause can be triggered by both sides which makes necessary some checks to avoid regression during the development.

The simplest thing to do, is to create an end-to-end test that cover the entire calls flow between Consumer Service and Provider Service. 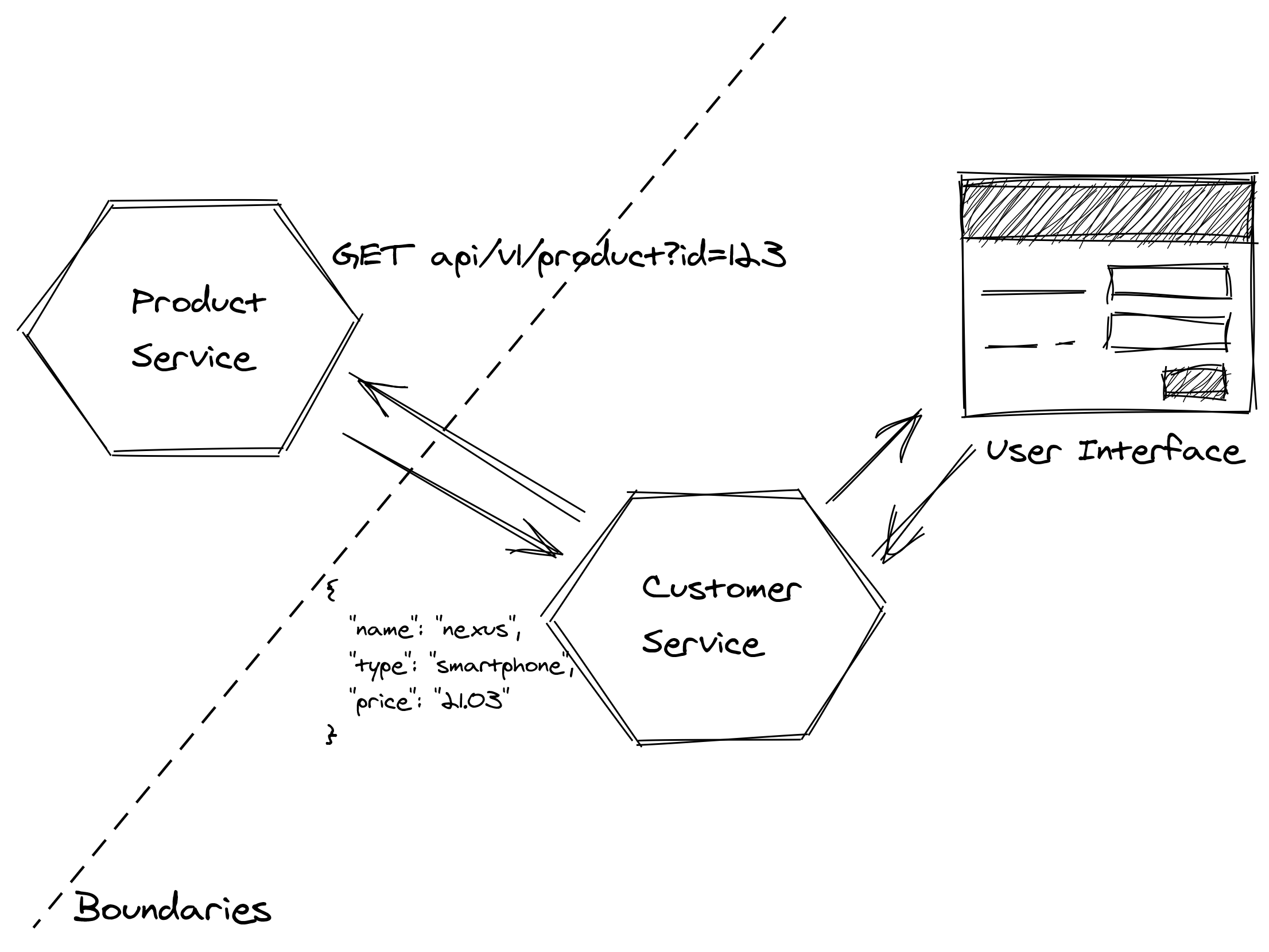 Despite what I previously said about simplicity, e2e testing give the best confidence on software behaviour but with some problems. They are flaky tests and often fail with false positive furthermore e2e tests are hard do maintain, slow, and it’s necessary to span multiple services in testing environment with terrible slowness caused by deploy flow and environment nightmares. There are some solutions (1, 2) that can provide the right balance between simplicity and maintainability which are a step back e2e tests but often you need a staging environment to execute tests verification or add a level of complexity to remove the environment need, which personally I found with these solutions a tedious process. Moreover, all these solutions are reactive approaches which in the simplest case, doesn’t avoid the integration of code that breaks the services interactions, but they provide a sort of alerting like open a Jira defect or github issue. It’s possible to avoid code integration in case of breaks but imply an overcomplicated CI or some experimental branch.

(I) usually dislike maintaining things which depend on environments or that needs hours to have a result. If something is faulty and slow, it’s often untrusted and consequently useless. Furthermore, works with other services means deal with other teams which are often too much busy doing new features. So then, to avoid this annoying stuff, it’s necessary to adopt a strategy which imply a level of complexity which usually developers are used to see: Mocks.

Mocks are a type of TestDouble that define a sort of specification based on expectations and, in this particular case, mocks can substitute APIs or clients reducing in this way, parties to set up and run. 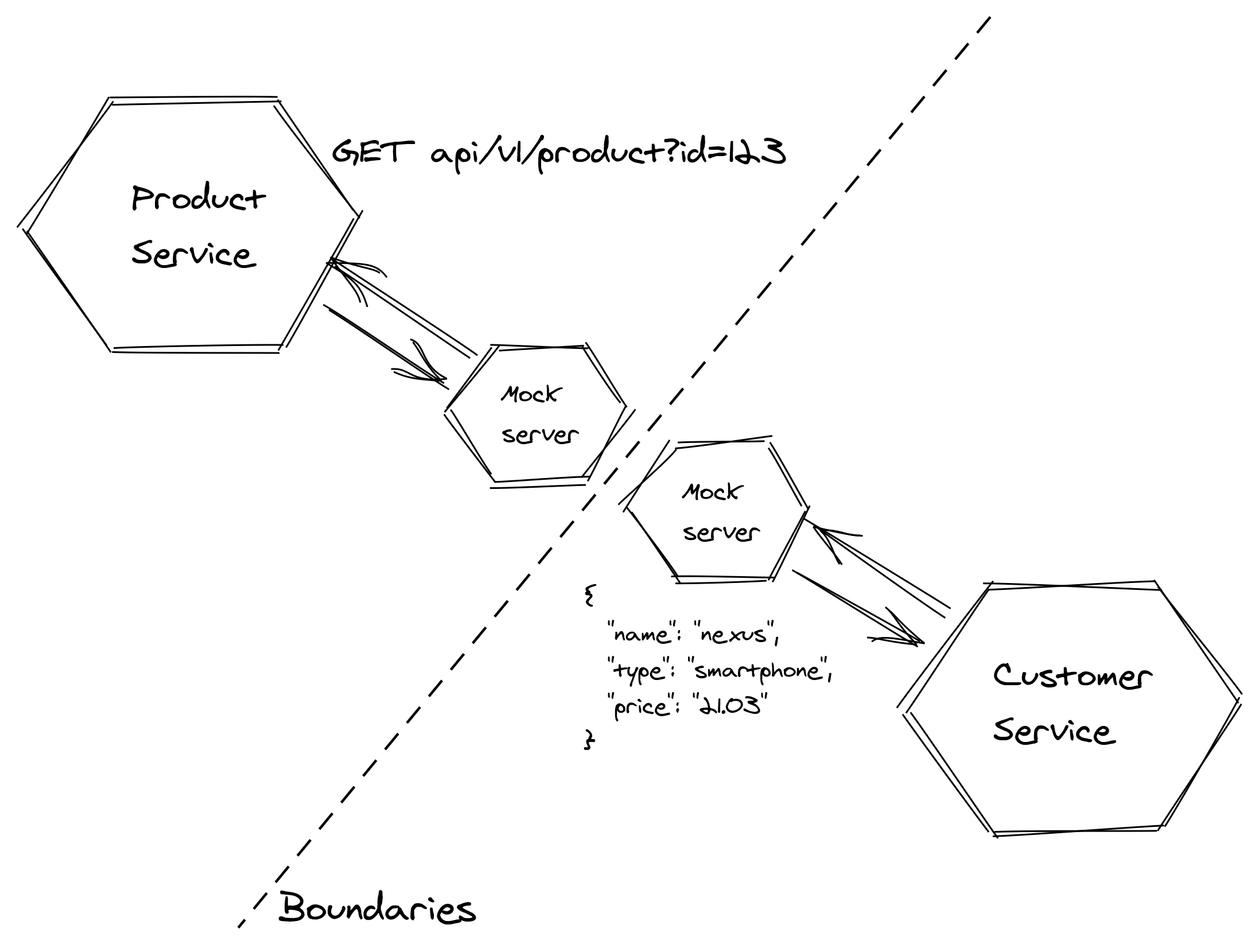 Even if the image show deployed services, there are many solutions to load part of an application which doesn’t imply a real execution. however, you can simulate an interaction through a mock or stub based on Contracts. As showed before, we can have two categories of breaking change based on the side that doesn’t maintain expectations and in the same way, we can identify two categories of contracts: 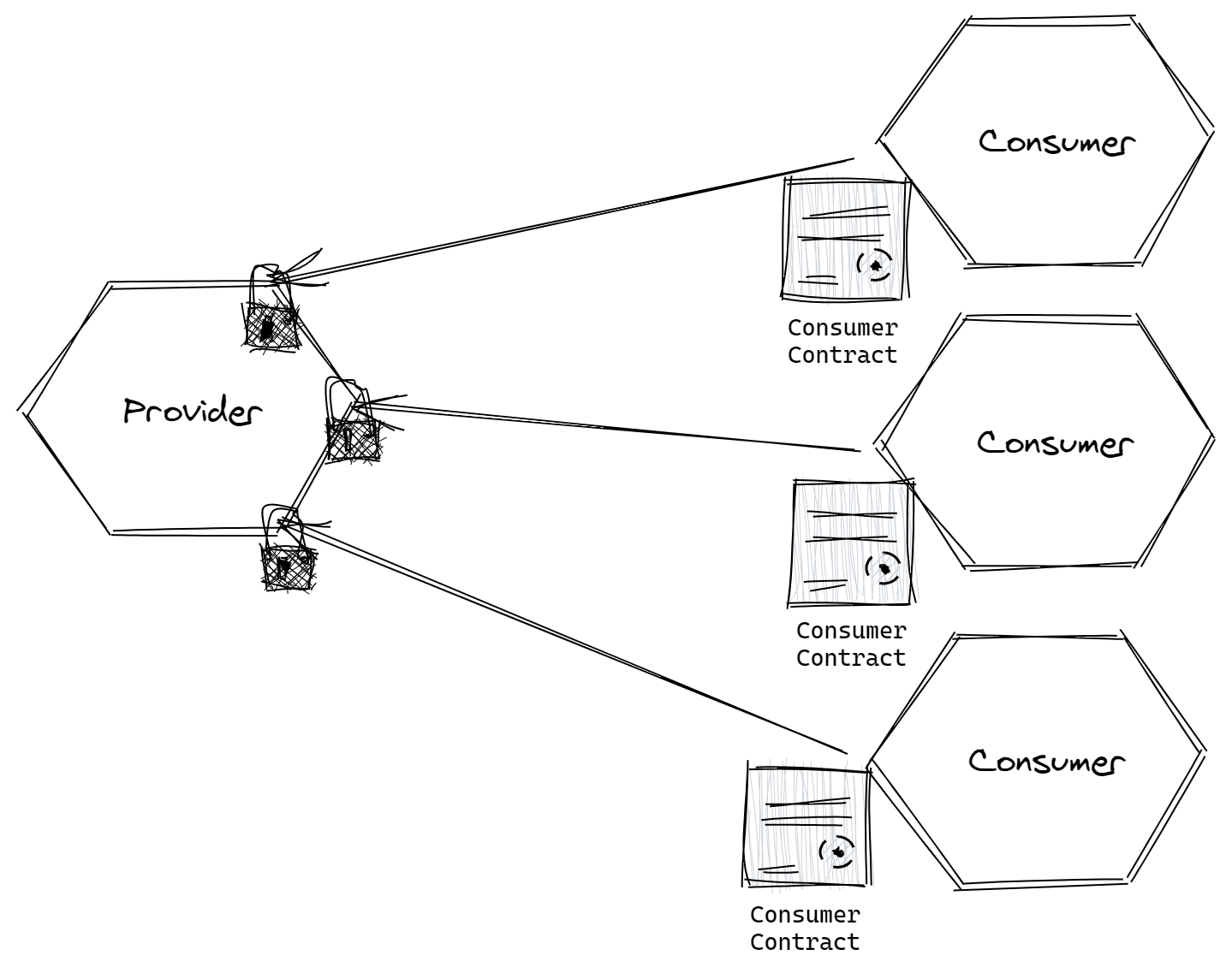 In short terms, it’s all about business. Consumer contracts point the finger on current supported business value exposed by the provider. In a consumer-driven approach, the sum of all contracts generated by the consumers and asserted by the provider is closed and complete respect the functionalities requested.

Anyway Consumer-driven Contracts drive the evolution of the services keeping the focus on what really matter with a feedback loop on the changes that will arrive during the life and death of the services which cannot be achievable with a Provider-driven approach which not take in account the feedback from the consumer.

In my experience, it’s easier and natural to think in a Provider-First manner than Consumer-first, and the reason behind this mindset, it might be connected to the fact that a breaking change made by the Provider is more detectable than the one made by the Consumer. In a real world example where your team isn’t the owner of both services, you have to deal with meetings, longer meetings and extravagant, informal, hermetic, long-winded design docs and other mythical beasts. A contract is a formal expression of needs and duties which can be another tool in your pocket that can be used in order to reduce the background noise during the process of evolution of services. Probably you know the sensation of powerlessness when a design doc or swagger definition reaches the mailbox or a shared folder and it’s necessary another meeting or mail tread to have a change in the definition or worse, get an HTTP response status error because someone made a little change in the API which isn’t versioned. 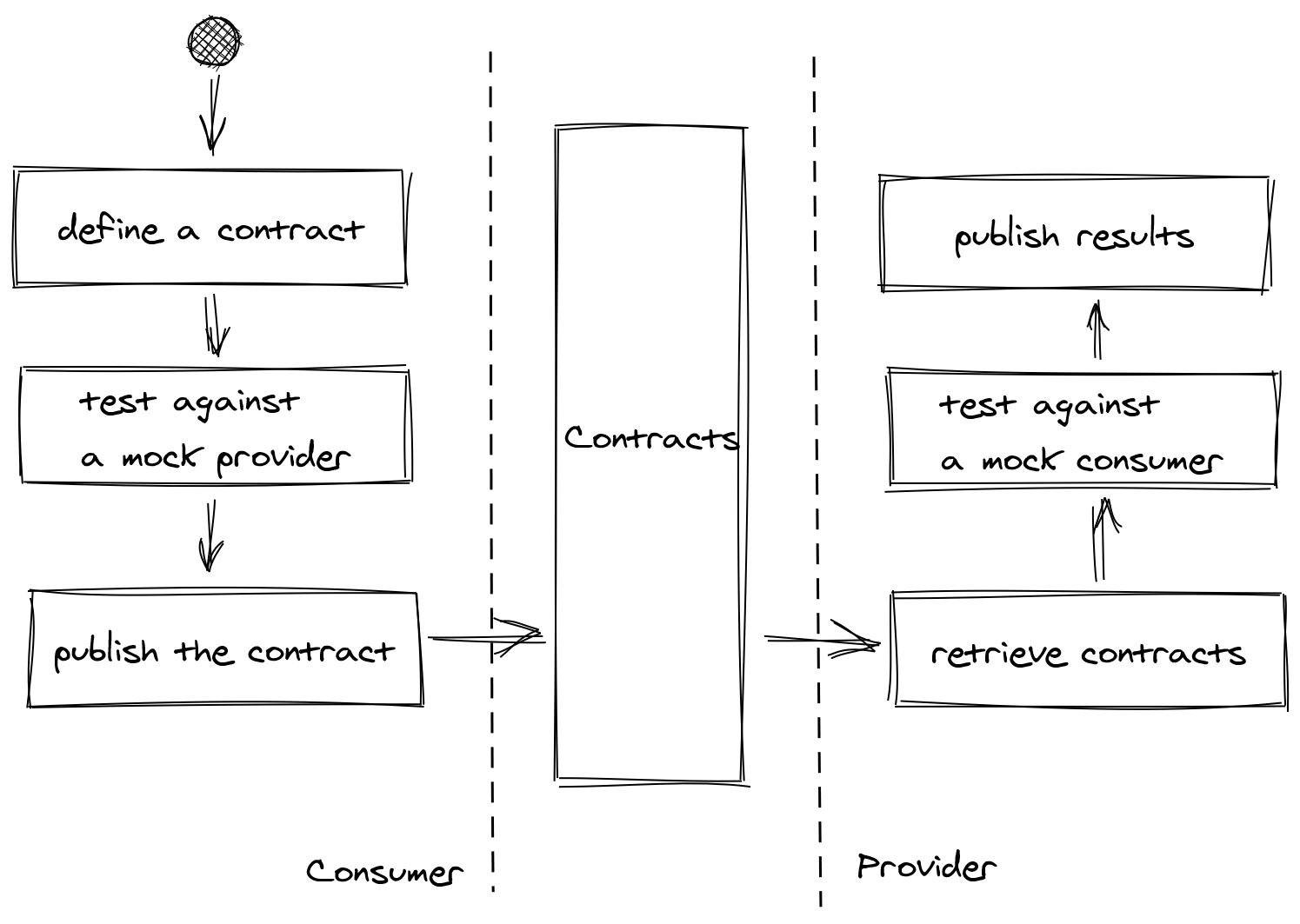 To summarize, Consumer-Driven contracts can give you a process that presents an iterative way of proceeding with a formalised format which can help large organization with services which are owned by different teams that can be in different locations.

Pact.io is an implementation of Consumer-driven contract testing which actually support many languages. At the moment of writing this post, pact foundation released v3 specification which cover the following features: 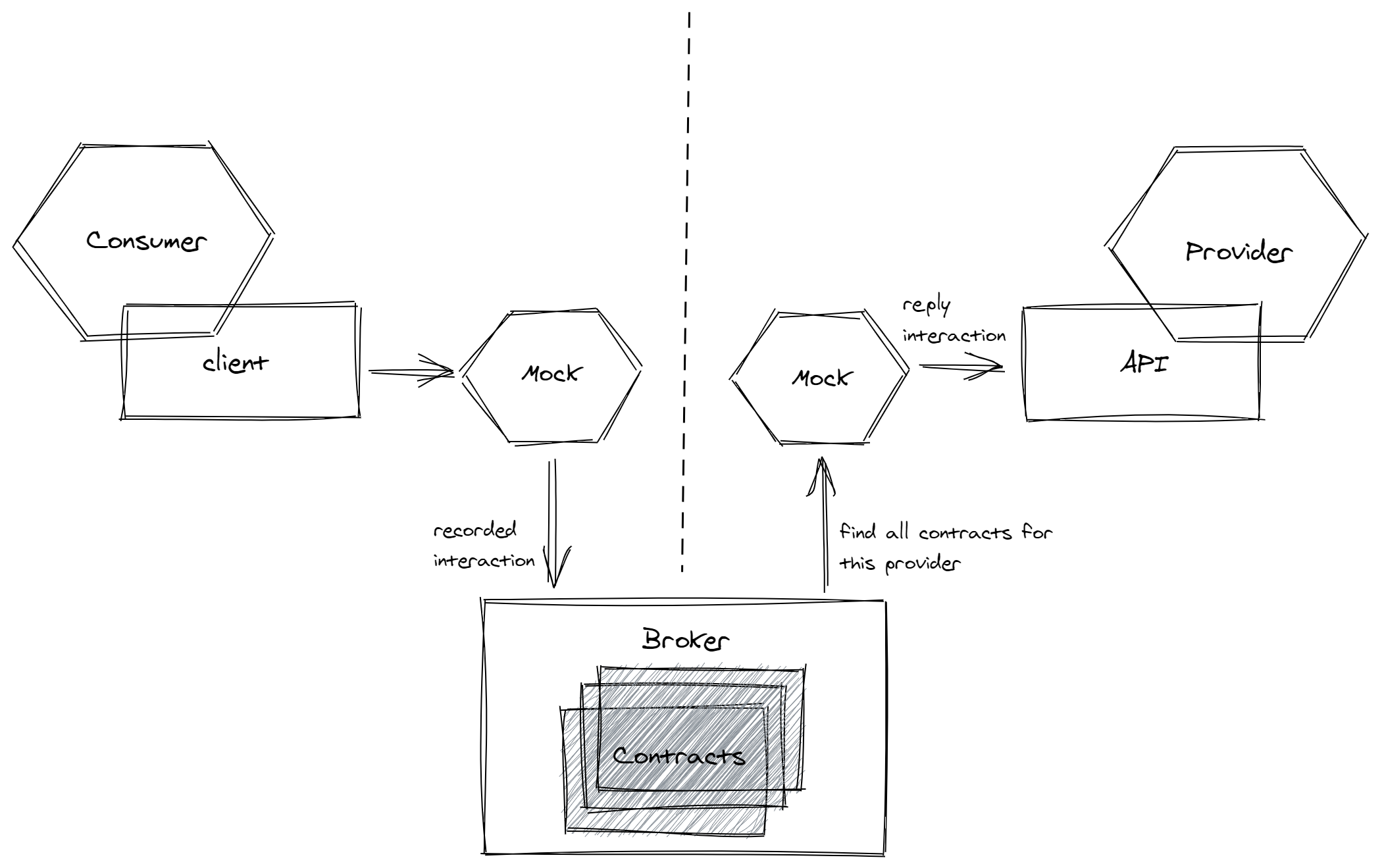 Furthermore, it’s available a broker which can be used to publish and share contracts between services.

We have covered the minimum set of principles and motivations that are necessary in my opinion to work with contract testing. In the next posts we will take a look to how: